APNIC recognizes several positive outcomes from the last decade of its ongoing dialogue with the ITU. APNIC has participated as observer in different ITU World and Plenipotentiary Conferences, and actively contributes to ITU IPv6 activities, such as the ITU-T IPv6 Group. APNIC also follows the WCIT process closely. Since 2011, APNIC has worked with the ITU Regional Office and its Centre of Excellence to organize a series of workshops on IPv6 migration strategies. 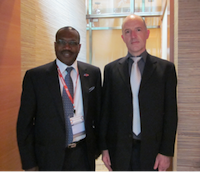 APNIC has observed most of the ITU’s IPv6 activities, participating in several workshops and has followed the proceedings of the ITU-T IPv6 Group since it was founded in 2010. When appropriate, APNIC contributes factual information as input to these activities, often in collaboration with the NRO.

At the first meeting of the ITU-T IPv6 Group in March 2010, APNIC contributed documentation with the outcomes of a special session at APNIC 29 that discussed a model proposed by an ITU-funded study by Nav6. APNIC responded with a document on behalf of all the RIRs and ICANN, explaining how IPv6 allocation works.

At a subsequent IPv6 Group meeting in April 2011, APNIC contributed to the NRO documents which were submitted in response to three Liaison Statements, addressing and explaining:

At this meeting, the Telecommunication Development Bureau (BDT) presented a proposal to work intensively on capacity building and IPv6 deployment in developing economies. In response, the NRO submitted two letters, one to the Chair of the IPv6 Group, and a second one to the ITU BDT Director, expressing optimism at the signs of increased collaboration between the ITU and the Internet community on IPv6 capacity building initiatives with developmental objectives.

APNIC was present as observer at the ITU Plenipotentiary Conference in October 2010. In this meeting, ITU Member States passed Resolution 180, “Facilitating the transition from IPv4 to IPv6”, which resolved:

“to collaborate closely with the relevant international recognized partners, including the Internet community (e.g. Regional Internet Registries [RIRs], the Internet Engineering Task Force [IETF], and others), in order to encourage the deployment of IPv6 by raising awareness and through capacity building.”

APNIC and the ITU Regional Office and its Centre of Excellence are currently working together on regional projects: